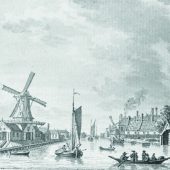 From early on, the Ie formed part of the sailing route from the Zuiderzee (now IJsselmeer) to IJlst and Sneek and – prior to the reclamation of the Middelzee – also to Leeuwarden. Woudsend developed into a hub for shipbuilding and commercial relations. Woudsend was the home port of 25 to 30 seagoing vessels around the year 1750. More than one third of the village’s active inhabitants worked in the fishery sector, shipping and shipbuilding industries or in associated businesses. Woudsend’s population grew dramatically from 734 in 1749 to 1,400 in 1890. In addition to its shipbuilding yards, where mainly seaworthy koffs and smacks were built, Woudsend boasted countless smaller businesses: mast and block workshops, a sailmaker’s workshop and a tarring workshop for fishing nets and sails, several blacksmitheries, a rope-making yard, two sawmills, eight carpenter’s yards, etc.

The De Jager sawmill is a typically Friesian mill; an octagonal wooden smock mill, installed on a square foundation. The mill features three attics as well as a Friesian upper strut construction. The entire building, including the annexed sawing sheds, is installed on a brickwork support. Both the cap and the hull are thatched and the mill includes three sawing frames. The mill is believed to have been built in 1719. During the 18th and 19th centuries, the sawmill played an important role as a source of sawn wood for the village shipyards. In addition, at the time, Woudsend also a second available sawmill, named De Hoop. Today however, there are no visible traces of this mill. The De Jager sawmill was restored at end of the last century. The mill is still in operation and it is run by millers who work on a voluntary basis.