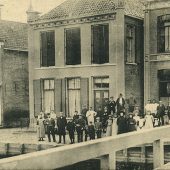 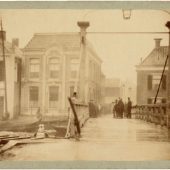 Shipbuilding declined in the course of the 19th century. Commercial shipping saw a growing demand for larger vessels with increased draught and Woudsend lost its function in favour of cities and villages in Groningen. The shippers, their crews and craftsmen became farmers, merchants, fishermen, shopkeepers, carpenters, traders etc.

Woudsend in the 20th century

The shipbuilding industry disappeared from Woudsend, but the village maintained a multitude of other activities. A soap factory, an oil mill, an insurance company, a dairy, two sawmills, a grain mill and various smaller retail businesses ensured its economic vitality. In addition, a large part of the workforce was active in fisheries, freighting/regular barge services and the agricultural industry.

The Smidsteech
Enroute
Previous
Next
Eindpunt
This site uses cookies.