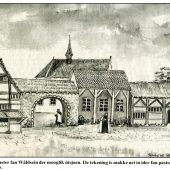 The oldest known year in which Woudsend was mentioned is 1337 when here, at this site, the fathers of the Carmelite Order founded a monastery. It was a small monastery, including a convent church. This minster was replaced by a new church building in 1660, which in turn was demolished in 1837 and replaced by the current church called De Karmel (the Carmel).

In the early Middle Ages, the Southwest corner of Friesland was not ideally suited as a residential area due to its peatlands and multiple stretches of water. However, Friesland’s growing population resulted in the need to cultivate the land and to keep livestock. The inhabitants consequently began to cultivate the peatlands, whilst establishing settlements and villages. Ypecolsga, mention of which has been traced back to 1132, under the name of ‘Ipekeldekerke’, is one of these villages. It is likely that, at the time, the nearby village of Woudsend was already an agricultural settlement. The year 1337 is considered to be the official year of origin of the village of Woudsend.

The name of this Protestant Church was derived from the Carmelite monastery that was once situated on this site. The present church building was designed in the early 19th century by engineers of the then Ministry of Water Management, which is why it is referred to as a ‘Water Management church’. The building, designed in Neoclassical style, was realised in 1837; the church interior was totally restored in 2008. The pews were replaced by chairs, the front of the organ was restored to its original colours and the church hall was redesigned to include round forms. De Karmel was voted as the most splendid church in Friesland in 2009.

The park in front of the church was used as the Woudsend cemetery up to 1933. When the park’s capacity became insufficient, the cemetery was cleared and relocated to a spacious site in the village of Ypecolsga, bordering on Woudsend on the road leading to Balk.

Slabs in memorial of the Tromp family

During the park’s renovation in 2007, vestiges of the old cemetery were unearthed, including the gravestones of the Tromp family. The Tromps formed a highly influential family in the village of Woudsend, owning land, farms and shipyards in the 18th and 19th century. Furthermore, Age Hylkes Tromp was one of the founders and the first director of the Onderlinge Brandwaarborg Maatschappij Anno 1816, an insurance company, later known under the name Woudsend Verzekeringen. To commemorate the important role that the Tromp family had played in Woudsend’s development, their gravestones were restored and installed in the church garden, to the right of the entrance.

In 1337, there were seven fathers of the Carmelite Order who roamed Friesland, which – at the time – was an untamed province. They were looking for a suitable site to found a monastery. They had been walking for days, starting from their monastery in Haarlem. They were tired, cold and hungry when they came across a resting place near a small agricultural small terp, or a minor sand knoll, surrounded by water. They had to plant their walking sticks deeply into the ground in order to remain standing upright.

They looked around them, and at each other. They needed no words. This was the ideal site to build the planned monastery. Hence began the story of Woudsend; a unanimous decision made by seven exhausted fathers.

The Ald Tsjerkhof
Enroute
Next
Blokmakkersteech
This site uses cookies.