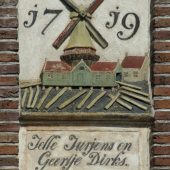 Pre-school kindergarten is attended before nursery school. The Nuts-Fröbel pre-school kindergarten, to which this alleyway owes its name, was situated on the Dwerssteech 2 (on your left after 50 m) and provided service until the nineteen-thirties. The facade tablet on the house to the right is one of this alleyway’s most striking details and refers to the De Jager sawmill.

A transverse alleyway is one that forms a connection between two main alleyways – in this case the Blokmakkersteech and the Bewaarskoallesteech. There used to be more transverse alleyways in Woudsend. However, due to the loss of the shipbuilding industry, the shipyards and associated business situated on the Ie were replaced by dwellings from the beginning of the 19th century. The houses in the alleyways are older and were accessible via the transverse alleyways. The inhabitants were then deprived of the view of the Ie, concealed by these new-built estates. The east-oriented facades and small gardens in the alleyways are still very reminiscent of the pre-1800 style.