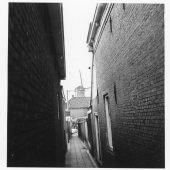 The name Nauwe Steech (Narrow Alleyway) may strike you as somewhat odd; for, after all, this looks like a fairly wide alleyway. However, in its early days, the original building structure had quite a different look. There once were houses very close to the alleyway on the site of the present-day grassland next to the church. Proof that the Nauwe Steech was definitely narrow at the time.

This is the oldest Roman Catholic church in Friesland and it is the only remaining sanctuary church. The phenomenon of ‘sanctuary churches’ emerged during the Reformation in the 16th century. Throughout the period, Calvinists had acceded to power in large parts of the Netherlands and the reformed religion became the leading movement. Catholics and followers of other ‘forbidden’ religions had to go into hiding and to conceal small places of worship in existing buildings. In the course of time, sanctuary churches were gradually permitted and paid licences were granted for their facilities. The conditions for the issuing of such permits implied that the building may not be recognisable as a church from the outside in any manner whatsoever (no towers, no stained windows) and that the use of these churches was not experienced by Calvinists as a disturbance. Churchgoers had to access the premises by a door that was not allowed to be situated on a public road and, despite this, only two persons were allowed to enter at the same time.

Bell ringing was prohibited and it was forbidden for any singing be audible outside the church. The Michaëlkerk dates back to 1662, when a regular house was appointed as a church facility (sanctuary church). A church was built on the same site in 1792, be it without a tower at the time; it was only in 1933 that a tower was finally added.

The white house on the corner is locally known as the Kapiteinshuisje (the Captain’s Cottage). It takes us back to the glorious 18th century, when Woudsend had acquired prestige, not only in the building and maintenance of seaworthy sailing ships but also in international commercial shipping. In those days, many shippers and their crews from Woudsend took to the high seas for trading purposes. They plied regularly to and from the Baltic Sea whilst intensive trading relations were also maintained with France, Portugal and Ireland.

One of the shippers lived in ‘the white cottage’ at that time (1737). One of its striking detail is the small anchor that still hangs from the house’s ridge-pole. Whenever the shipper was out at sea, the small anchor was hidden from sight. And when he returned home, it was immediately suspended once more in a conspicuous manner.