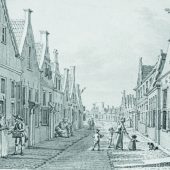 We are now standing on the crossing of the Wide Steech and the Midstrjitte. The Midstrjitte arose from a narrow sand knoll which formed an excellent base for building. It ensured optimal protection from the water and the foundations of the village of Woudsend were therefore laid on this very spot. Up to the mid 20th century, more than 50 houses and small shops were established along the Midstrjitte.

Commercial activity over the centuries

The Midstrjitte (together with De Dyk) was the bustling centre of the village until the middle of the 20th century. Habitation was dense and almost every house also served as a shop. There were no large supermarkets, but a multitude of small grocery stores, four bakers, three butchers, market gardeners, fishmongers, stores selling wooden shoes, hats, textile, petroleum, tobacco products, porcelain, pots, pans, wool, beverages, dairy products, clothing, rope, utensils, bicycles, lamps, stoves, paint, picture postcards and paper. The first half of the last century was a time
of poverty; unemployment prevailed and social facilities were non-existent at the time. Women would often run the shop, either to provide a slight supplement to their husband’s income, or because they were widowed.

Commercial activity has dramatically dwindled in Woudsend since the nineteensixties. In order to ensure the Midstrjitte’s continued vivacity, several stores are now focusing on Woudsend’s visitors.