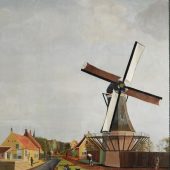 De Kamp is one of the oldest small streets in Woudsend. It was once used as a passageway connecting the heart of the village with the surrounding countryside and the ‘t Lam flourmill.

The ‘t Lam flourmill is the oldest mill in the village. A miller was already mentioned in a document pertaining to Woudsend’s taxation service as early as 1511. The building of the mill was commissioned by the contemporaneous monastery; the original mill was replaced by the presentday building in the course of the 17th century.

‘t Lam played an important role in the 18th century in providing supplies for seafaring vessels destined for long-distance itineraries. Groats were particularly popular because of their long-term preservability. From their journeys to the Baltic States, in addition to wood and grain, the same vessels imported mustard seed, which was processed into mustard in the mill. The municipality acquired the mill in 1960 and, since 1995, it has resumed operation for its original purpose; grain milling. Initially carried out by two voluntary workers, this work has long since been taken over by a professional miller who now runs the mill. The adjacent mill house was acquired by the municipality in 1999 and now serves as a shop for the sale of home-milled grain products.