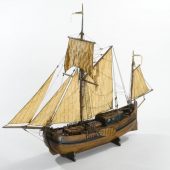 There used to be a sailmaker’s workshop on the Ie side of this alleyway. Sails were tarred across the water and tanned with a brown preservative liquid. These sails were used in the 18th and 19th centuries for rigging koffs and smacks, the vessels that were built and maintained in Woudsend.

The building on the right side of the alleyway – the premises of the Woudsend Verzekeringen insurance company – continues as far as the bridge and covers a surface of 3,700 m2. This insurance company was founded in 1816 by the Tromp family and other parties under the name of Onderlinge Brand Waarborg Maatschappij van Woudsend (popularly called ‘the office’). At its peak, the business employed around 280 people and was of paramount importance to the village’s economic vitality and employment. The monumental building on the corner near the bridge is the oldest. As the insurance company gradually developed, private houses located on waterfront were acquired and demolished to make way for business premises. Woudsend Verzekeringen was eventually acquired by ASR Verzekeringen, a national insurance company which, in 2012, decided to close the Woudsend business.