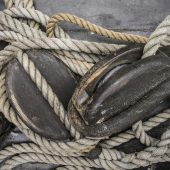 The Blokmakkersteech is one of the nineteen alleyways in Woudsend. The alleyway structure includes the oldest part of the village, which is referred to as the Old Core. Many of the names of the alleyways are related to Woudsend’s shipbuilding. The Blokmakkersteech is reminiscent of a mast and block workshop that was once located on the Ie-wal. A block is a pulley block on a ship.

The nineteen alleyways in Woudsend connect the centrally located Midstrjitte with the Ie waterway and with the western part of the village. The alleyway structure includes the oldest part of the village, which is called the Old Core. Many of the names of the alleyways are reminiscent of the 18th and 19th centuries, when Woudsend, although originally an agricultural settlement, was dominate for many years by a flourishing industry of shipbuilding, ship maintenance and international commercial shipping. The names of the alleyways take their origins from local tradition. Certain alleyway names are easy to understand; however, to grasp and interpret others requires historical knowledge and a hint of imagination.

Four out of the nineteen alleyways were, a long time ago, reached via a narrow access channel; however, these channels were filled and blocked in the course of the 18th century.